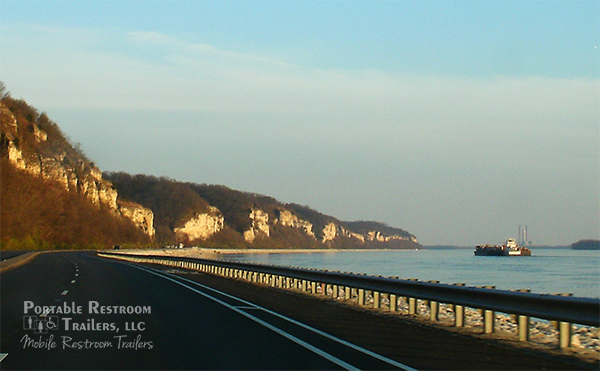 ADA Restroom Trailers on the Banks of the Mighty Mississippi

America has a soft spot in its heart for the lore and legend of the Mississippi River.  From the stories of Mark Twain to the music of Louis Armstrong and Johnny Cash; the mighty Mississippi has played an important role in the cultural and economic development of the United States.  We recently delivered a couple of ADA restroom trailers to a town on the river’s banks, whose history and future are integrally linked to the big river itself.
Grafton, Illinois is a town on the outskirts of St. Louis, located at the confluence of the Mississippi and Illinois rivers.  The town has multiple ferry boats that shuttle cars back and forth between Missouri and Illinois.  It is home to a historic boat works building where locals built some of the great paddle wheel steamboats of the 19th century.  For hundreds of years, families here have lived alongside the river.  They know the river’s beauty and its history – but they also know the serious dangers it can present when its waters begin to rise.

The Intriguing History of Grafton, Illinois

Grafton was founded in 1832 by James Mason, who purchased almost four square miles of land near the mouth of the Illinois River, anticipating that it would be an important shipping hub for freight traveling in between Chicago and St. Louis.  A rich economy quickly developed, centered around several limestone quarries and the boat construction industry.  Jobs in Grafton attracted workers from around the region, and the country, and the town’s population peaked in the 1850s.
After the initial boom subsided, the town’s population plateaued at approximately 1,000 people.  Grafton remained stable for the next 100 years, until its population declined when the waters of the river rose to historical levels in 1993.
Because of its proximity to the water, Grafton’s residents have always been subjected to occasional flooding.  The first major flood happened just 12 years after the city was founded, in 1844.  But the 1993 flood was different, as waters rose to historical levels, cresting at a record 38.2 feet.  The town was devastated, and one third of its population did not return after the waters subsided.

Resiliency and Rebuilding on the River

The people of Grafton demonstrated an amazing level of resiliency when they returned home to their water-soaked town in the wake of the 1993 flood.  They quickly re-fashioned the town as a boutique historic tourism destination, and they built a new lighthouse on the banks of the river as a monument to the town’s resiliency and determination.
Today Grafton is home to seven separate sites that are listed on the National Register of Historic Places.  Its charming Main Street district is home to an interesting assortment of antique shops, boutique gift shops, restaurants, and wineries.  The recently completed Grafton Harbor marina provides an outlet for boating, jet skiing, and parasailing on the river.  And the town enjoys an influx of tourists who come to see the bald eagles that gather in mass along the river during winter months.

Preparing for the Future with ADA Restroom Trailers

While the flood of 1993 was the worst, it was certainly not the last flood that Grafton will see.  The river reached flood levels again in the spring of 2017, and those who have lived their lives on the banks of the rivers there know that there will be more floods in the future.
The city’s government reached out to PRT recently to discuss the procurement of some ADA restroom trailers to assist with future evacuation events.  When hundreds of people are displaced by rising waters, restroom facilities at temporary housing shelters can quickly be overwhelmed.  ADA restroom trailers will allow the city to better accommodate its citizens when floods occur, regardless of any special needs or mobility impairments.
We were more than happy to help the resilient people of this historic city in their efforts to be prepared for future events.  Emergency response and preparedness is one of our specialties.  And after listening to the city’s requirements for capacity and accessibility, we were able to find a couple of ADA restroom trailers that perfectly meet their needs.

The Sierra Series 4 station ADA restroom trailers that we sent to Grafton meet all federal requirements for ADA compliance.  They are built with commercial-grade materials for maximum durability.  And they provide the same levels of comfort, privacy, and sanitation as a traditional brick and mortar restroom.

The floor plan features four compact unisex restroom suites, each with its own private external entryway.  The suites have a flushable china toilet, an automatic metered sink, and a framed shatterproof glass mirror.  Soap and paper towel dispensers are standard.
At the rear of the trailer is a folding ramp with 1 ¼” stainless steel safety railings which leads to the ADA suite.  The ADA suite features assistance grab rails, an accessible toilet with push-button flush mechanism, and an accessible sink.  There is ample room to allow for a full 360-degree turning radius for standard-sized wheelchairs.  To allow for safe and easy entry, a kneeling axle hydraulic lift system lowers the entire trailer to ground level with the push of a button.
The floor of each suite is constructed with a single sheet of non-skid rubber flooring.  Each external entry is lit with an LED porch light.  And the entire trailer is climate-controlled with a roof-mounted air conditioner and integrated heat strips.

In most locations, the standard features and floor plans of our ADA restroom trailers are fully compliant with local accessibility standards.  For the trailers that we shipped to Grafton, a customization was required.  We reconfigured the maintenance room of each trailer to include a mop sink, in order to comply with Illinois state regulations for ADA restroom trailers.  Our engineers made quick work of the customizations and we shipped the customized trailers within a few days of receiving the final order.
If your organization is interested in learning more about ADA restroom trailers for emergency preparedness or any other application, please get in touch with PRT today at (877) 600-8645.  We have the widest selection of portable units on the market today, and our trained representatives will help you find a solution to match your requirements for capacity, accessibility, and any necessary customizations.