Next Monday, November 11th, we will honor the men and women who have served in our armed forces. Veterans Day, which has been celebrated since the end of World War I, is usually accompanied by Veterans Day Parades across the country. These parades are often filled with military units and veteran groups to honor and remember those who have served.
The longest running Veterans Day Parade takes place in Birmingham, Alabama every year. The parade, which was first organized in 1947, has lost some of its popularity in recent years. 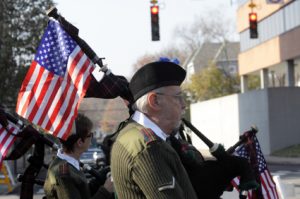 "Over the years, the size of the military has been reduced so you just don't have the numbers you used to have and now technology plays such an important role in the military and you don't see as often the tanks and heavy guns that used to dominate the parade,” says Mark Ryan, who became president of National Veterans Day in Birmingham in 2011. He has worked over the past two years to rejuvenate the parade.
One of the big considerations for parade organizers are restroom trailers. Providing portable restrooms for your parade could allow the attendees to stay longer and be more comfortable. Not supplying restroom facilities can put a strain on local businesses who may have non-customers using their bathrooms.
In many cities, such as Chicago and Dallas, all parades are required to provide portable restrooms for their attendees. These rules are made in an effort to keep the parade grounds and the city clean and sanitary.
Surprisingly, some cities with famously large parades do not provide restroom trailers. The Macy’s Thanksgiving Day Parade makes it difficult for their attendees by not providing any portable restrooms along the parade route. This past weekend the City of Boston decided not to provide portable restrooms for the parade celebrating the Boston Red Sox World Series victory.
As Veterans Day approaches we applaud parade organizers like Mark Ryan for trying to make their events the best they can be. “My vision is that with the right kind of support we can turn Birmingham's Veterans Day parade into a yearly must-see event much like the Macy's Thanksgiving Day Parade.”
For information about a Veterans Day Parade in your area visit VetFriends.
To all of our Veterans we are honored by your sacrifice and thank you for your service!