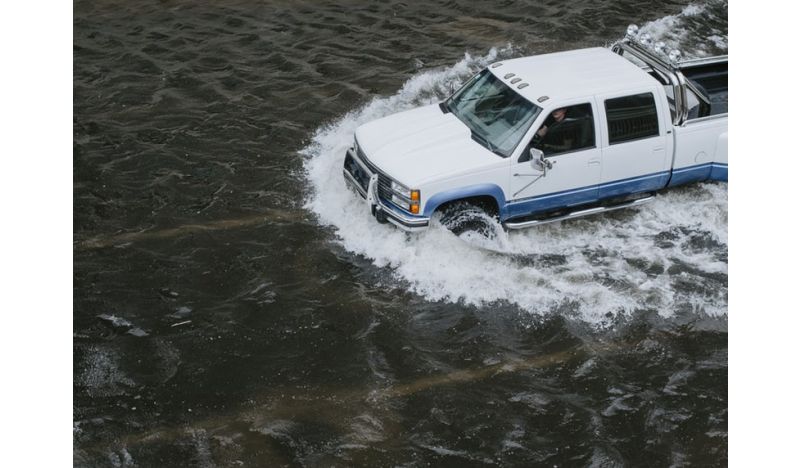 The 2018 Atlantic hurricane season was one of the worst we’ve seen to date. This season has been one leaving behind great devastation. With 15 named storms, 8 hurricanes, 2 major hurricanes and a total of $33.3 billion in damages, millions of people were left in catastrophe. Our portable restroom rentals have been able to support a number of nonprofits and communities affected during this difficult time.

One of the most climactic of the season was Hurricane Michael. This was the second storm of the season that set records of devastation to the Florida Panhandle, which hadn’t been hit so hard since Hurricane Dennis in 2005. Hurricane Michael was the first category 4 storm on record to ever make landfall in the region. Before Michael had even made contact, an estimated 30 million people were under a hurricane watch or warning, or tropical storm watch or warning, across six states (Florida, Alabama, Mississippi, Georgia, South Carolina and North Carolina), along with Central America.

This Category 4 storm was packing maximum sustained winds of 155 mph as it made landfall Tyndall Air Force Base near the point of windfall, Mexico Beach. Due to the pressure of the storm, Michael is the third-most intense to ever hit the East Coast, following the 1935 Labor Day Hurricane and Camille in 1969. It was also the strongest Atlantic hurricane to form in the month of October since Hurricane Wilma. It surpassed Andrew in 1992 and was the strongest storm in the Florida Panhandle in history. Wind speed made it the fourth-strongest landfalling hurricane in the United States.

Michael originated from a broad in a low-pressure area that formed in the southeastern Caribbean Sea on October 2. By October 7, it had grown into a Tropical Depression after a week of slow development. Within 24 hours the storm had intensified into a hurricane near the western tip of Cuba, as it moved northward. It gained major notoriety on October 9, with a peak wind speed being only 2 mph short of Category 5 hurricane strength on the Saffir–Simpson scale. Hurricane Michael was transmigrating with a frightening fury.

Hurricane Michael made history on October 10, 2018, not only by making landfall near Mexico Beach, Florida, but also by being the first category 4 hurricane to do so. With powerful peek winds of 155mph, the east coast braced themselves for impact. As the hurricane migrated northeastward toward Maryland and Virginia's Chesapeake Bay, it was without a doubt weakening. By the time it moved on to Georgia, Michael had downgraded to a tropical storm. The storm continued on while transitioning into an extratropical cyclone off the coast of the Mid-atlantic states on October 12. Finally, Michael was projected grow subsequently into a intense extratropical cyclone. It emigrated to the Iberian Peninsula, located in the southwest corner of Europe, before finally dispelling on October 16.

At the end of Hurricane Michael, there were 60 unfortunate deaths that have been attributed to the storm, tallying 45 in the United States and 15 in Central America. A total of $14.58 billion in damages, including $100 million in economic losses in Central America, has been tallied. An estimated $3.3 billion in insurance claims have been filed in the U.S. and the number continues to rise.

While in form as a tropical depression, Hurricane Michael caused extensive flooding in Central America along with a second disturbance over the eastern Pacific Ocean. While in Cuba, the hurricane's winds left over 200,000 people without power as the storm passed to the island's western region. Along the Florida panhandle, Michael left the most devastation for Mexico Beach and Panama City. Horrific damage was reported due to the extreme winds and storm surge. Countless homes were flattened and thousands trees fell over a wide swath of the panhandle. A maximum wind gust of 129 mph was measured on October 10, when Michael made landfall at Tyndall Air Force Base. Michael then made way across the Southeastern United States, with strong winds causing extensive power outages across the region.

All in all, Michael was a terror and left so many people and businesses to pick up the pieces. With all devastation comes the chance to rebuild, which can be a silver lining for some areas. It’s a time to upgrade and renovate businesses. In Mexico Beach, Fl, one of the most plundered areas, Mayor Al Cathey has hope for the future of the small town. “We’re going to lose some of the quaintness that we had, in the old cottage style houses,” he told Reuters.com as he surveyed the damage in his truck. “But we’ll be newer and improved. Although the community, void of condominium high rises and hotel chains, is bound to be built differently to limit future damage.”  Brock Long, administrator of the Federal Emergency Management Agency (FEMA), told CNN, “Local and state officials must be proactive in passing the necessary regulations, It’s OK if you want to live on the coast or on top of a mountain that sees wildfires or whatever, but you have to build to a higher standard...If we’re going to rebuild, do it right,” Long said.

A COMMUNITY IN NEED

Rebuilding takes time. It will be years before the sandy white beach town is back up and running in full force. With damages totaling in the millions, it will without a doubt need great efforts to be made. Where do you start?  Especially when you need it done correctly and immediately.

A monumental part of rebuilding is funding, but as a business, how can you gain funds when you don't even have a functional building? A huge part of being able to open any facility is that you must have a working restroom, for your employees and customers.  During this delicate time to rebuild the city of Mexico Beach it’s more important now than ever to keep the strong pulse of the city moving.

As a leading provider of portable restroom rentals, we are proud to partner up with businesses to help build a better tomorrow. We’re here to serve as a remedy and help with the basics to get back up and running. You never realize how important certain amenities are until they’re gone. The sooner you get back up and running the sooner you can gain some normality, and more importantly turn a profit.

“Founded in 1945, Baker Distributing Company is engaged in the sales and distribution of HVAC, refrigeration, food service equipment, parts and supplies for residential, commercial and marine applications. Baker Distributing offers customers a wide range of product lines, competitive pricing, superior customer service and valuable, timesaving services that position us as an industry leader.”

“Our organization has the experience to meet your company’s heating, ventilation, air conditioning, refrigeration and food service requirements. With over 200 locations in 22 states, each Baker Distributing Sales Center is staffed by the most knowledgeable and customer service oriented people in our industry.  With a complete inventory of HVAC/R products and technical assistance, our Sales Centers can provide you with the products and information you need to make your job and you more efficient.”

Here at Portable Restroom Trailers, we pride ourselves on helping providing our clientele with the best portable restroom rentals possible. The Comfort Series 3 Station Combo Shower / Restroom Trailer is the perfect solution for locations requiring shower and restroom facilities in one compact environment. 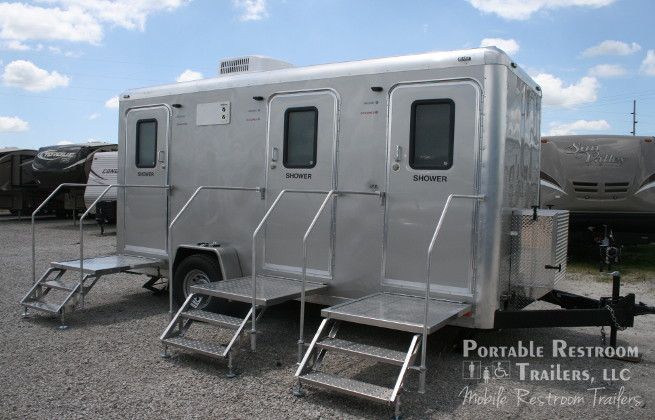 Patrons are also sure to enjoy the comfort of a fully climate-controlled environment maintained by air conditioning and heat strips. All together, portable restroom rentals like this helped Baker Distributing Company get their employees back to work and business running as best as possible.

By teaming up alongside Baker Distributing Company, we are personally helping make a difference with portable restroom rentals. Allowing a voluminous amount of workers to get back to operation will not just help the employer, but the employees, and this benefit trickles right down to the consumer. With collective locations throughout the affected area of hurricane Michael, we’re ensuring that jobs are back to those when they need them most. We’re doing what we can to ensure citizens are getting what they need to not only rebuild their homes but also rebuild their communities but their lives.

When tragedy strikes, it’s more momentous than ever to come together in any way possible. Many efforts are being made at this time to help those directly involved in the aftermath of this abominable storm. Visa is doing their part by creating the “Back to business project,” lending a hand to small businesses dealing with the difficulties of patching things back together. Stats show that “after a natural disaster, 96% of small businesses see revenue losses, with 35% experiencing losses of greater than $25,000.”

You can go to www.usa.visa.com/support/small-business/back-to-business-project, the small business merchant locator tool that will help you find small businesses affected by federally declared natural disasters, including disasters other than hurricanes and forest fires, that you can support.

Many Charities and other organizations had been involved since before the storm made landfall. Organizations like Team Rubicon, Samaritan's Purse, All Hands and Hearts Smart Response, and Direct Relief were closely monitoring the path of the storm and prepped to deploy relief teams to assist in its immediate wake. These charities, and others like them, have provided food, shelter, medical care, and other necessities to victims of the storm. Groups and partners alike are the backbone of these disasters in being the first responders and dealing with people in their most frantic of states.

When working in the shelters, volunteers report seeing evacuees watching their surroundings and, more tragically, their lives be forever changed. “It’s terrible... I don’t know how to explain it. No businesses are open. People are just doing what they can do,” says Pastor Chris Washington of Beacon Light Community Church in Panama City. He and a group of volunteers distributed relief supplies to a little over 300 members of the community by Oct. 18 at the church. “This is going to be a long recovery here,”  continues Pastor Chris.

Portable Restroom Trailers is here to help when disaster strikes, and thanks to us being able to ship nationwide we can go wherever you need us with easy drop off and pick up we help take some stress off your back with portable restroom rentals. Call us today for more information at 1-877-600-8645. If you would like to give a helping hand to those desperately in need, you can check out a few of the following organizations. Team Rubicon, Samaritan's Purse, All Hands and Hearts Smart Response, Direct Relief and Visa.

There are so many people that are standing by to support those in need. It’s so important that in times of crisis, we stand united. One of the greatest things to come out of situations such as this is that we continue to  support and uplift one another. Rebuilding a community is a team effort, and it is deeply moving to see people from all walks of life coming together in Florida Peninsula,Chesapeake Bay, Central America, and the Iberian Peninsula. All affected areas are still in the beginning stages due to the catastrophe, but they’re in it for the long haul to rebuild the places they all call home.