This weekend, Portable Restroom Trailers had the pleasure of providing one of our units for the USGA’s 34th Annual Senior Golf Open. Our Luxury Series Event Restroom Trailer graced the beautiful fields at Omaha Country Club in Omaha, Nebraska for one of the most exciting and record breaking weekends in the golf tournament’s history.
The first U.S. Senior Open Championship was played June 26-29, 1980. It was established to promote the increasing popularity of senior golfers and was originally open to golfers age 55 and older with a minimum of an 8-stroke handicap. A year later the age was dropped to 50 and older to make the tournament more competitive. 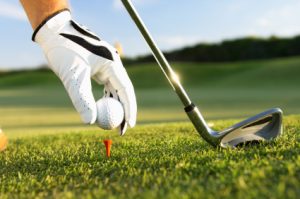 After the first 2 rounds on Saturday, Michael Allen held a 5-stroke lead, the largest lead after 36 holes in the tournament’s history. However, Kenny Perry made a run for the lead in the third round. Coming from 10 strokes back, he posted a 64 in the third round to bring him within 2 shots of Allen.
Kenny Perry made history by finishing the fourth round with a 63 to win the tournament. His final round score is the best in the Senior Golf Open’s 34 years. His 127 in the final two rounds also marks a record for the tournament.
Omaha Country Club enjoyed one of the largest turn outs the USGA has ever seen for this exciting comeback victory. It was a perfect weekend at the club and we were extremely exciting to be part of it as our restroom trailer provided additional restroom accommodations to the spectators. Whether it’s a festival, fair, concert, race or big building remodel, our Large Luxury Series Event Restroom Trailer is designed to effectively optimize larger crowd movement. Unlike those embarrassing porta-potties your guests complain about, this modern, contemporary portable restroom trailer is generously appointed with upscale designer touches.
As the popularity of golf increases it has become extremely important for country clubs to update their facilities to meet the demand. Our portable restrooms offer the perfect way to cater to spectators and golfers while still offering the luxury associated with the clubs chosen to host the USGA.
We can’t wait until our next golf weekend and hope it is as exciting as this one!
Posted in: PRT Customers