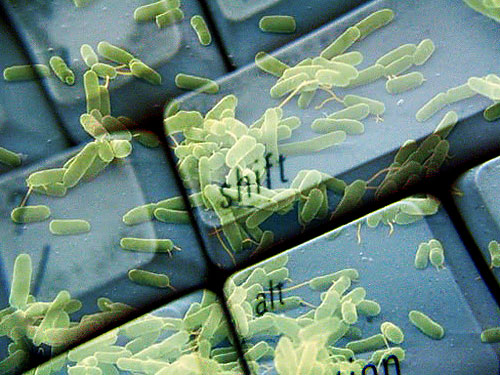 Which is Dirtier: A Portable Restroom Trailer Toilet or Your Computer Keyboard?

If you think a restroom toilet seat, especially a portable restroom trailer toilet seat, is home to more harmful bacteria than your office computer keyboard, you'd be wrong. And it's enough to make you sick.
According to HealthJockey.com, a series of tests conducted in London offices found that more than one in ten keyboards tested positive for E. coli and staphylococcus, the bacteria responsible for food poisoning. And the results were more than 150 times the acceptable limit for bacteria.
Lead microbiologist, James Francis said, “Two keyboards examined under a microscope contained levels of bacteria so high they had to be removed from the office.” Adding, “One carried more bacteria than the average toilet seat and I've rarely come across anything as filthy in my 22-year career.”
How does a keyboard become dirtier than a much-used office toilet seat? Easy: people eating lunch at their desks, not regularly cleaning their desks and equipment with cleaners (the study found nearly half the employees neglected this), and not following proper hygiene by washing their hands after using the restroom. This is the perfect recipe for bacteria development. And increases the chances for an employee to become ill.
Restrooms, on the other hand, are cleaned regularly in most offices. And portable restroom trailers, like ours, are not only cleaned regularly, but some even come with a full-time attendant whose job it is to make sure they're sanitary at all times. Keeping the bacteria risk to a minimum. Which is more than we can say for your computer. Maybe offices should hire keyboard attendants.