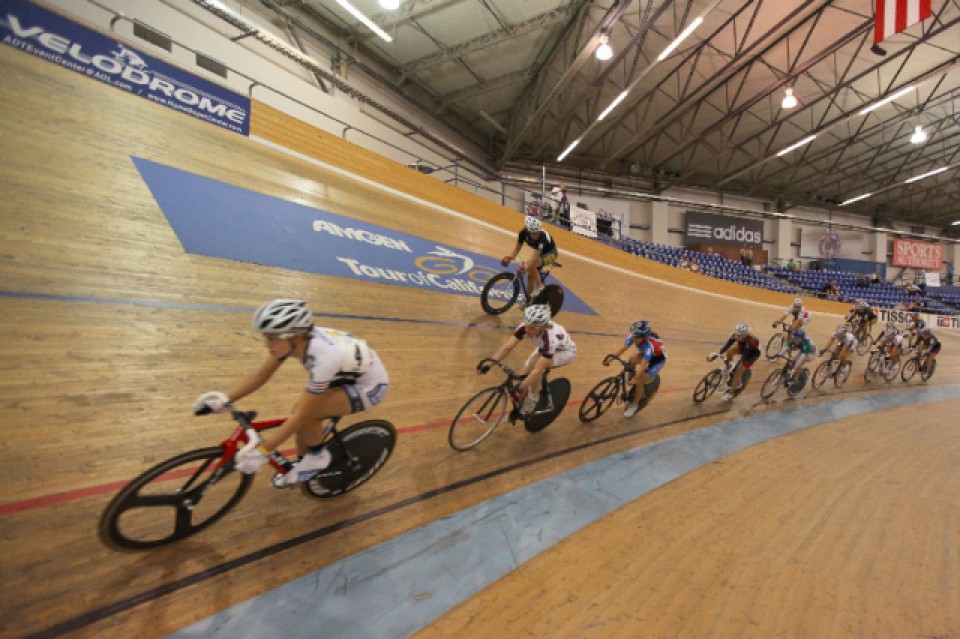 Building a Cycling Community in Detroit with Portable Restroom Trailers

Mid-town Detroit added an exciting new community resource last weekend when the Lexus Velodrome opened its doors for the first time.  We were happy to see that the opening was a big success, and we are very proud that we were able to support the new dome with a portable restroom trailer.
What is a velodrome, you might ask?  Velodromes are the arenas for the sport of track cycling.  It’s an exciting and fast-paced form of bicycle racing, and it is a mainstay of the Olympic Summer Games.

And while the community in Detroit is certainly looking forward to hosting some big track cycling races next year, there is even more excitement about the impact the new facility will have on the neighborhoods in its area.  As you’ll see, the story behind the new velodrome is as much about community as it is about cycling.

A Quick History of Track Cycling in America

Track cycling races take place on a relatively small and steeply sloped track.  The bicycles are simplified road racing bicycles, with no brakes and fixed gears.  Races are divided between two categories, sprint and endurance.  Sprint races are typically 8-10 laps, and endurance races vary from 12 all the way up to 120 laps.
While track cycling is a popular spectator sport in Europe, Japan, and Australia – it has a smaller following here in the United States.  It has been included in every running of the modern Summer Olympic Games, with one exception in 1912.  The sport enjoyed some popularity back in the 1930s, when New York’s Madison Square Garden regularly hosted a series of six-day indoor races.  Awareness of the sport declined over the following decades, although it never went away completely.
Today, the American Track Racing Association represents 16 American velodromes which keep a busy seasonal schedule from May through October each year.  And there are at least eight more velodromes in the states that don’t belong to the ATRA.

The Story Behind Detroit’s New Velodrome

Construction of the new Lexus Velodrome started in April of 2017.  It is located in Midtown Detroit, inside the city’s Tolan Playfield park, where its white dome reaches 60 feet into the sky.  Inside the dome is the velodrome racing track, along with three other tracks dedicated for walking, running, and skating.  The infield features a fitness area and a café.  While the facility itself is impressive, the story behind it is even more so.
The velodrome will be managed by a newly formed nonprofit organization, the Detroit Fitness Foundation.  Their stated goals in creating the facility reach far beyond just hosting world-class racing events.  The organizers envisioned a place where area youth and elderly residents could obtain free fitness and training programs, a place that could support the nation’s largest minority cycling team, and a place that would develop Olympic-caliber racers to eventually compete on the world stage.
The money for the initial construction came solely from a single “angel” donor, who gave approximately $4 million dollars to finance the project.  The same donor also provided $125,000 to the city to make unrelated improvements to Tolan Playfield Park.  Now that the dome is complete, its operations will be financed by a mix of user fees, community donations, and corporate sponsorships.  The naming rights to the dome were recently purchased by Lexus.

A Portable Restroom Trailers in a Permanent Location

When the plans for the inflatable dome were initially laid out, one thing that was missing was the restrooms.  The velodrome can accommodate up to 980 people at a time.  The café in the track infield will serve food and beverages, including beer, during events.  And some of the events will last for hours.
When the cost, infrastructure, and regulations associated with a permanent brick and mortar bathroom were taken into consideration – it became apparent that the dome’s founders needed to find a more suitable alternative.  When they reached out to the team here at PRT, we were more than happy to help them find a portable restroom trailer that would accommodate the dome’s capacity and provide all the comforts and conveniences that attendees would expect from a permanent restroom.

The portable restroom that the dome’s management chose is a high-occupancy unit that is built to commercial standards so that it can withstand heavy foot traffic while maintaining a neat and clean appearance.  The floors and ceilings are built with single sheets of material, for maximum durability and easy cleaning.  Our units have all the elements of a traditional permanent restroom – china toilets, privacy doors, working plumbing, and climate control.  And when one of our units is installed as well as it has been in this new dome – you might not even know that you’re in a portable restroom trailer at all.

When the Lexus Velodrome isn’t hosting world-class cycling competitions, the facility will be dedicated to providing healthy and constructive activities for the community.  Adults can sign up for track cycling classes at beginner, advanced, and elite levels.  There is a junior track cycling class for kids.  For little ones who aren’t ready to ride on the track, there’s a balance bike class available to kids ages two to five.
On the other tracks, classes are available for running, walking, and skating for various levels of expertise.  Access to all equipment and programs is free for seniors all day long, and free for children after school every weekday, until 5 p.m. when the dome starts charging for admittance.
Here at PRT, we’re looking forward to watching the success of the new dome as it builds a local community in Detroit, and builds a stronger bicycling community for the United States.  And, of course, we’re very happy that our portable restroom trailer provided a flexible and affordable alternative to meet the dome’s needs for restroom capacity.  If you think a portable restroom trailer might be a good option for your business or organization, please don’t hesitate to get in touch with us today at (877) 600-8645.